We had a wonderfully lazy morning as we shared our breakfast from the Bunkhouse and gathered our things. We got a ride from the owner up to the trailhead and began climbing around 10:30. Devil’s Slide Trail seemed less dangerous now that it wasn’t raining, but the 2.6 miles of incline was not a simple task first thing in the morning. 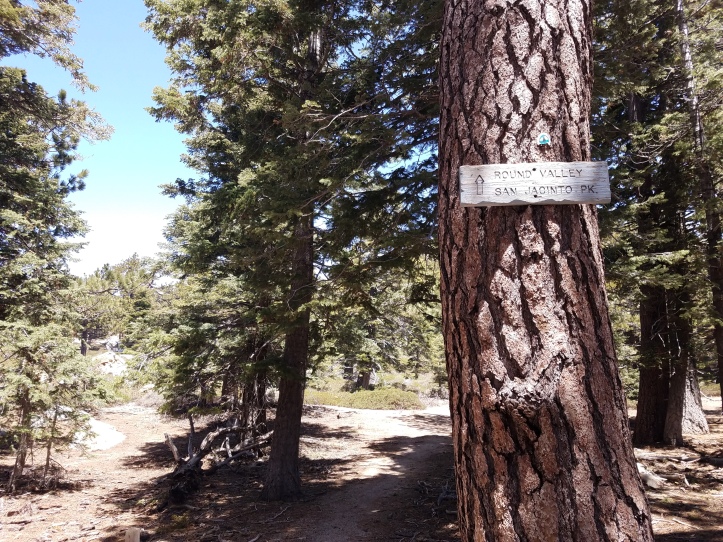 We reached Saddle Junction and continued up through the pine forest, encountering small patches of snow as we went, until we reached the junction with the San Jacinto alternate which would take us to the peak. Strider, Julia, AnnKristen and I sat at this junction and enjoyed lunch, relaxing before our final push to the summit. Two hikers came down the alternate from the peak- it was Zack and Nick! They had hidden their packs behind some bushes and “slackpacked” (hiked without their packs) to the summit and back already this morning. They had been confident on the snow without microspikes so gained confidence as well. Soon we parted ways with Strider and the three of us ladies were off to summit a mountain. 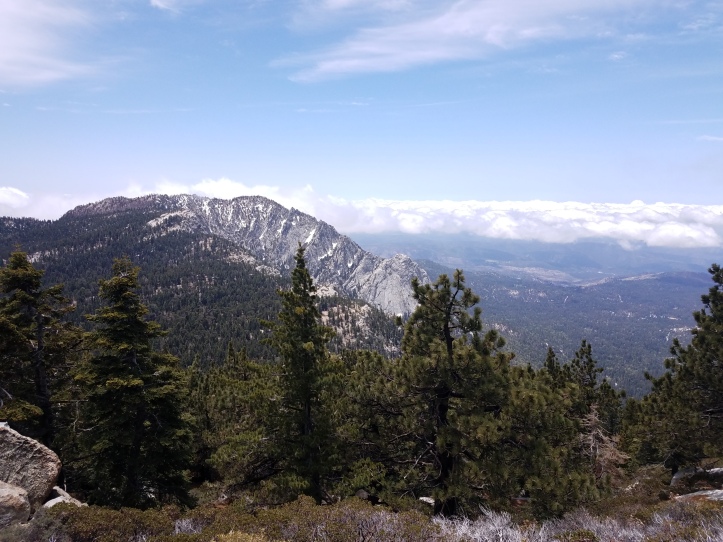 The reports had said that hikers might need microspikes (a traction device that fits over your shoes) to traverse the snow on the mountain, especially if they were inexperienced hiking on snow. I’m from Ohio, I can handle snow- or so I thought. Mountain snow is SO different than the mounds of lake effect we get back home. This snow might as well have been rock covered with slush, with few places to dig in or grip. Fortunately there weren’t a lot of difficult spots on the way up, but I was definitely not comfortable on the snow without microspikes.

We reached a junction where the trail up met the trail that goes down the other side, along with a sign pointing up: 0.3 miles to the peak. Unfortunately, there was no apparent trail going up since it was entirely buried in over a foot of snow. It probably reached 4 feet deep or more in some places but was solid. We all scrambled up the snow until we reached a stone emergency shelter- our home for the night. Here we found Cyndi and she was our guide to the peak.

The view was breathtaking. Clouds hung below us to the west, we could see the wind farms and the city of Cabazon to the north, and even the edge of Palm Springs to the east. The trees were covered in ice and squeaked and occasionally shattered in the wind. 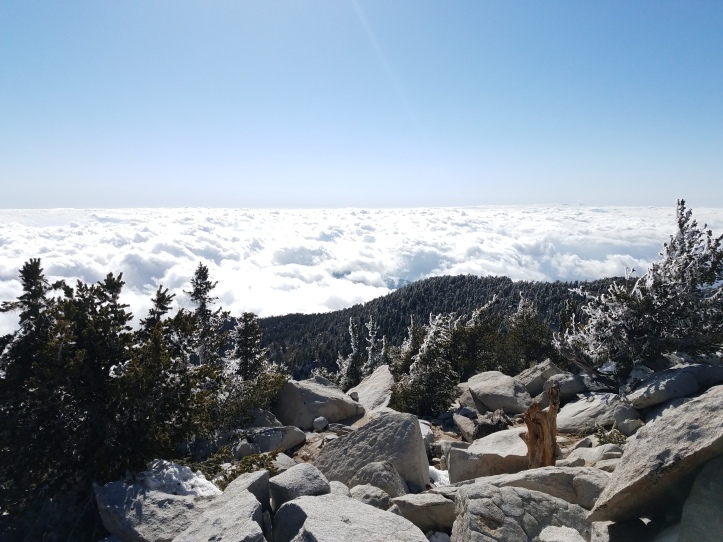 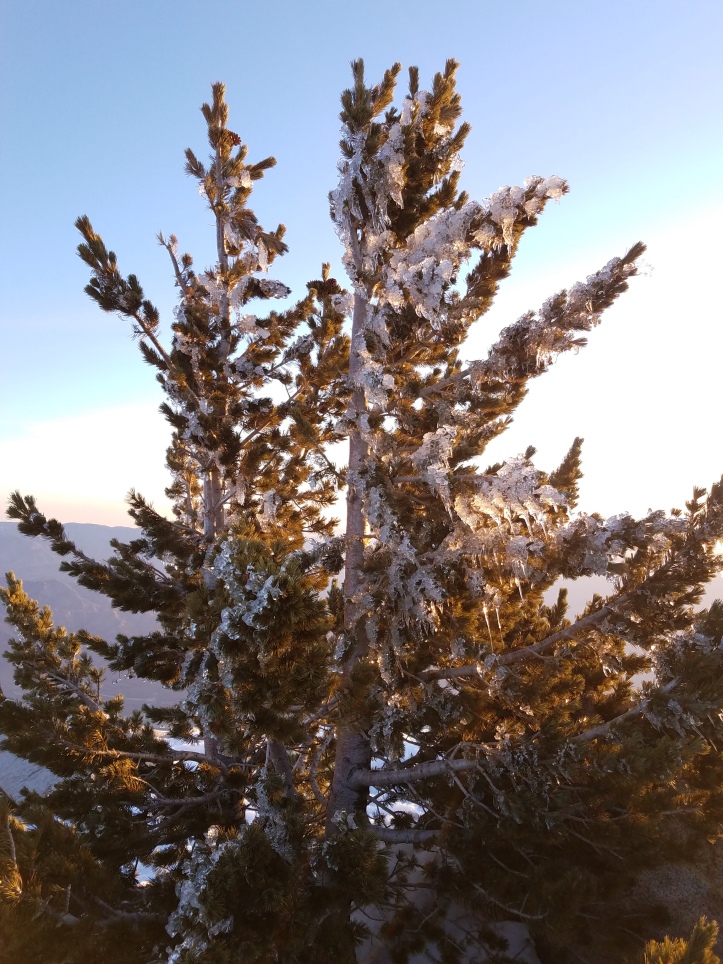 We stayed until we were shivering uncontrollably and then made our way back to the shelter. It was somehow colder inside. We bundled up in our sleeping bags and made hot food and tea to try and warm up. Our thermometers told us it was below freezing inside the shelter.

When the sun began to set we talked about going up to see it but no one wanted to leave their sleeping bag. We were a bit miserable, but we were on top of a mountain and how often do you get to do that? I stepped out to go to the bathroom after dark and could see the twinkling lights of Palm Springs again before tucking back into my bag and shivering myself to sleep.

Enjoyed a great 5 mile hike this morning that landed us in a very wet snowstorm. A good way to start the last day of 2019. Ember may not have appreciated it quite so much 🤣
We had just conquered Forester Pass, the highest point of the trail at 13,200', in the snow. I had zero snow trekking experience and was terrified. I scrambled, had an anxiety attack, cried, put myself back together and pushed myself over that pass with some of the most incredible people I've ever met. The view on the other side was breathtaking and we pushed across a large snowfield to get to this rocky outcropping for a short break. I could have sat there forever, staring off at the mountains, the snow-covered peaks, the many passes I still had to traverse. I had no idea that in less than 2 weeks, my journey would abruptly end. In this moment, I was totally raw and part of the trail, and was so eager to see what it would teach me next. #pct2019 #pacificcresttrail #foresterpass #backpacking #sierras #womenwhohike #thruhiking 📸: Pretty sure this was taken by the wonderful @pct_bandaid who reminded me every day that I was brave and strong and could do this. He also put up with a lot of my shit when I was cranky and/or having major snow anxiety... The elusive Tunda Scribe WILL conquer the Sierras, eventually!
Sometimes a girl just needs her horse... . It has been a couple of months since I had to get off of the trail and I am still struggling with it. I am seeing pictures here of so many of my fellow hikers enduring deep snow and winter storms to reach the northern terminus, but they are making it. I am so happy for them, but still feel like a failure in some ways. I know I couldn't have kept going on my broken foot, nor could I have completed the trail this season after healing, but it doesn't change that feeling of not achieving my goal. . Returning to society is so much more difficult than I anticipated, and although it IS getting better, there are still things that are even more triggering than they were pre-trail. Wastefulness, consumerism, sensationalism in the media, some aspects of technology, politics, crowds, a general carelessness toward nature and our wild and remote places. . Yesterday, I spent some time indulging in what was my escape and safe place for many years- horses. I haven't spent nearly as much time with my boys as I should have in recent years when "life got in the way", but what is life if it "gets in the way" of the things we love? I am learning to prioritize and structure my life around the things and people that I love rather than around the things I have been conditioned to think I need. . #priorities #horses #agirlandherhorse #posttraildepression #failure #societyfeelings #findyourhappyplace ace #saddlebred #greenerpastures
We had planned to do a much longer trip to see Ramona Falls and some other nearby sights, but lost all motivation when it downpoured on us. We stopped for lunch and ended up stringing up our tarps and just hanging out for the rest of the day. The next morning brought sunshine and a short but lovely hike to these amazing falls. Part of this hike was on the PCT and it was a little bittersweet to be back. I am still struggling internally with not being able to finish the trail this year and with the nuances that come with reintegrating into society, but being back out here with my trail family was an experience I wouldn't trade for anything. #ramonafalls #oregon #exploreoregon #optoutside #backpacking #hiking #trailfamily #mushrooms #waterfall #nature #fungi #rainyhike #tarplife #hikingintherain #hikeoregon
I have never thought of myself as a beach person, but today's excursion to Haystack Rock and its surrounding tidepools may have changed my mind. #haystackrock #oregon #exploreoregon #beach #ocean #pacificocean #sandcastle #beauty #sandybeach #oregoncoast #dontwanttogohome
I finally finished uploading all of my desert-section posts from the PCT to the blog, including an overview with stats from the whole 702 miles! I still have close to 200 miles of the Sierra section to write about, so stay tuned! I never expected to have to end my hike so early, but I am so glad to have this record of memories and so many great photos. Enjoy! #pct #pct2019 #pacificcresttrail #soimslow #adventure #thruhiking #socal #southerncalifornia #highdesert #mountains #hiking #backpacking #hikersofinstagram #hikertrash #hikelikeawoman #naturephotography #nature #vista #whataview #wishiwasthere #cantwaittogoback
Create your website at WordPress.com
Get started
%d bloggers like this: