Day 17- Every day a new challenge

The wind blew relentlessly all night. I worried that my tent would rip into shreds due to how hard it was flapping in the wind, but props to Six Moon Designs for making a super strong, lightweight shelter- it seems perfectly fine even after two weeks of obnoxious wind. 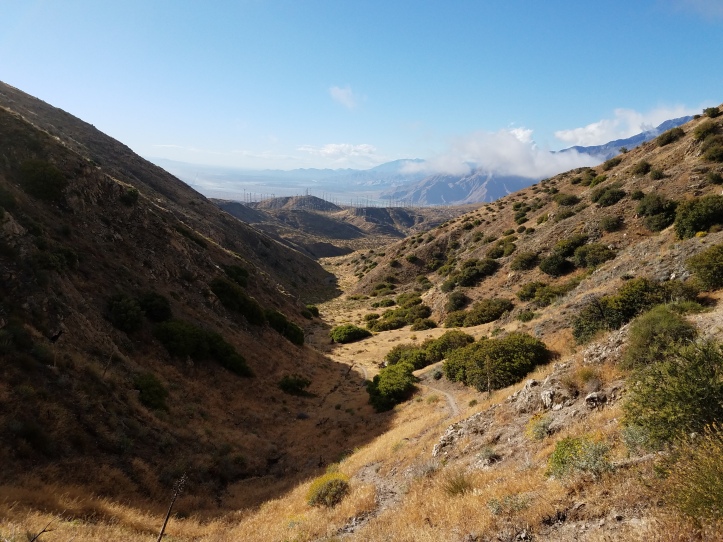 I was slow to get moving this morning. It was cold and blowing and my body still hurt from yesterday. I went to use my bandanna and noticed it was gone- it must have detached from my pack and blown away in yesterday’s crazy wind. That’s two bandannas lost. People were hiking by as I was packing up, making me feel bad about my late start. I wondered where they had camped that they were already passing me, or if they had gone into town yesterday and were fresh and rested. 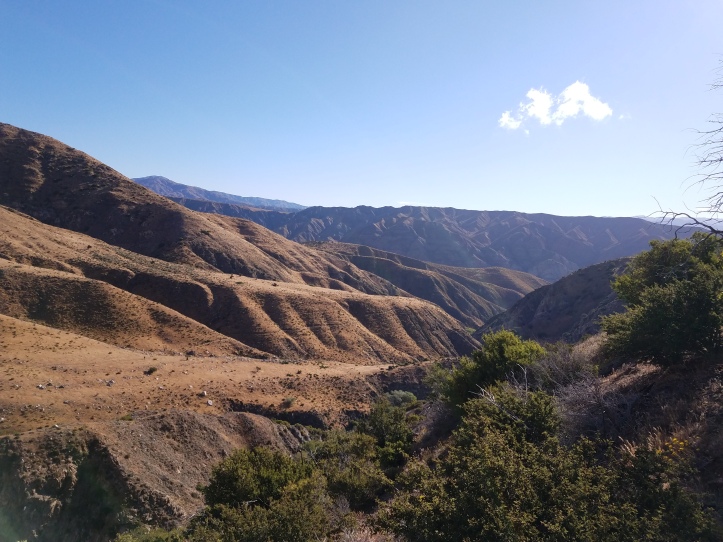 The morning started with a steep climb out of the wind farm. I noticed two tents still pitched on my way up the ridge, so I didn’t feel as bad about my late start. I also wondered if these were people who had passed me and then gotten caught in the rain. During the climb, my body did not hesitate to make its complaints known: hip could use some more rest and left knee didn’t show up for work today. The knee became unbearably painful throughout the day and slowed me down significantly.

The trail switchbacked its way down the other side of the mountain from the initial ridge and leveled out a bit as it followed a large riverbed. This flat area was not particularly interesting BUT I saw a roadrunner! Or it looked like a roadrunner (maybe there aren’t roadrunners here?). Whatever it was, it was cool!Eventually the trail came to the first of many water crossings for today. 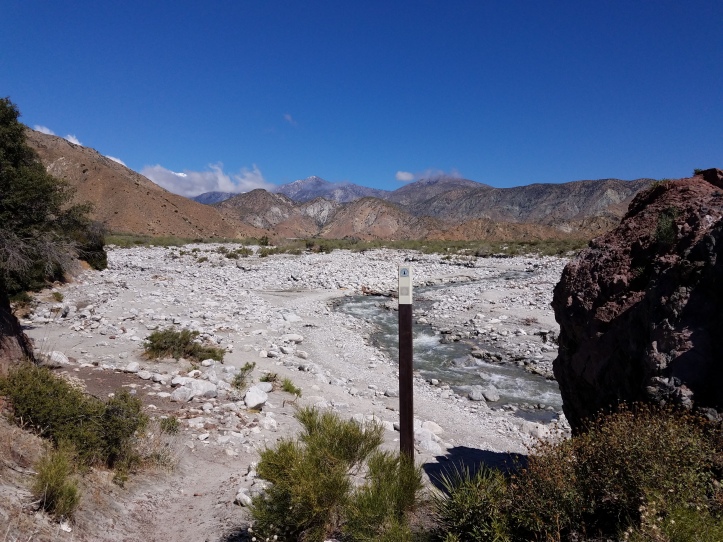 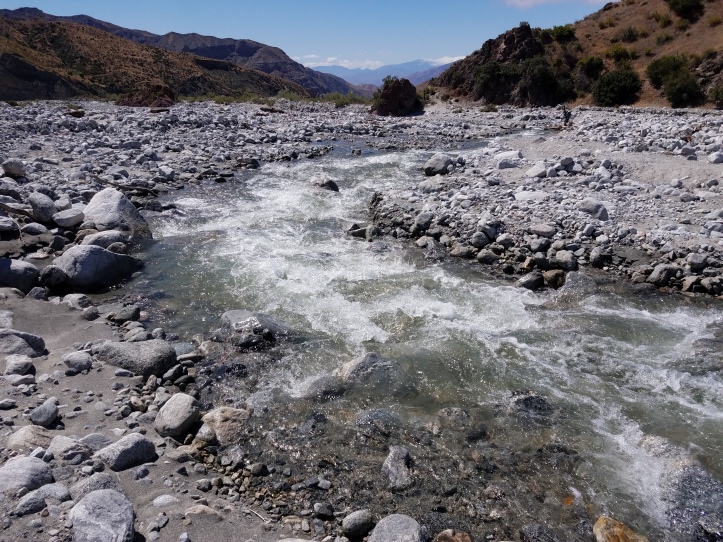 This was a real crossing- not something you could stay dry on. I looked for a spot that looked good but it was all about the same. Eventually I just walked right in, socks and shoes all on, using my poles for balance. The water wasn’t as cold as I expected but it was just over knee deep and moving swiftly. Once I was in it, I just had to move very slowly and deliberately and voila, it was done! I sat on the other side with another hiker named Sebastian for a little while, hoping my socks might dry in the sun and having a snack while watching two other hikers ponder the obstacle. 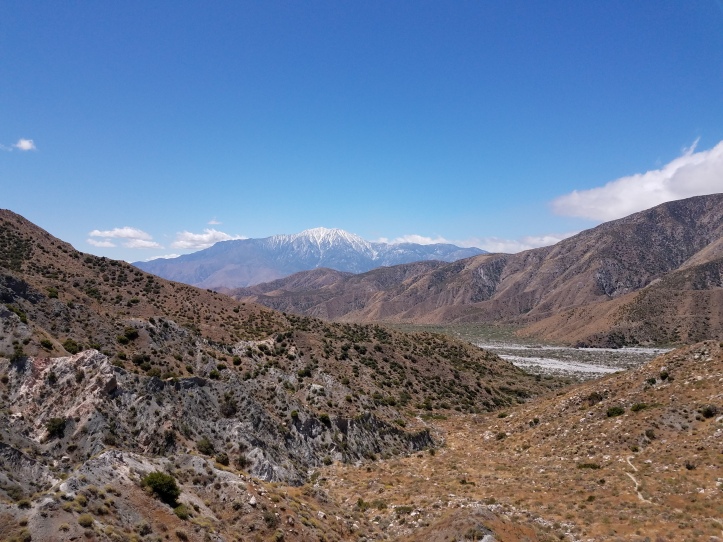 As soon as I got moving again, I realized the obstacle wasn’t finished- the trail was completely unmarked and washed away in the huge expanse of the riverbed. My maps are too zoomed out to be helpful here and my app didn’t have enough information. I tried to follow footsteps but there were too many going in too many directions. Fortunately, Sebastian came around the corner and using a different app, was able to find the trail again. 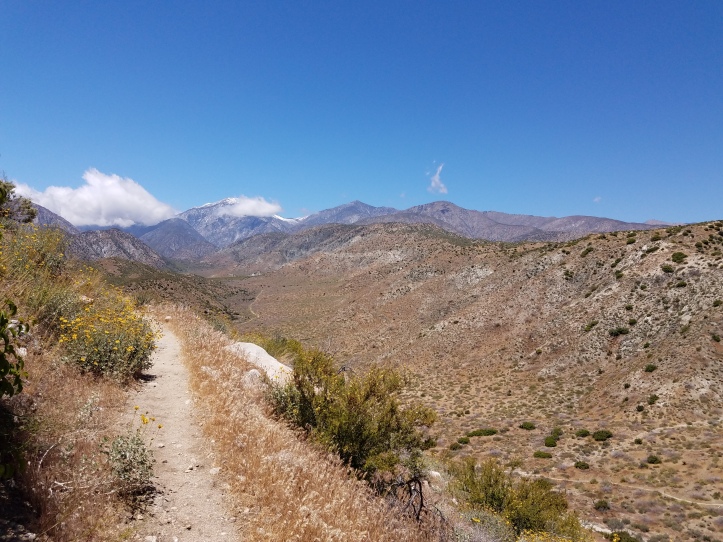 The trail then climbed and climbed and I thought my knee wouldn’t make it. I eventually got to the top of a ridge and the trail leveled out, giving me the freedom to look around and take in the absolutely incredible views. This was by far my favorite part of the day. Coming off of the ridge was a painful descent for my knees but at the bottom there was a perfect shade tree next to a river where other hikers were gathered, including Sebastian. 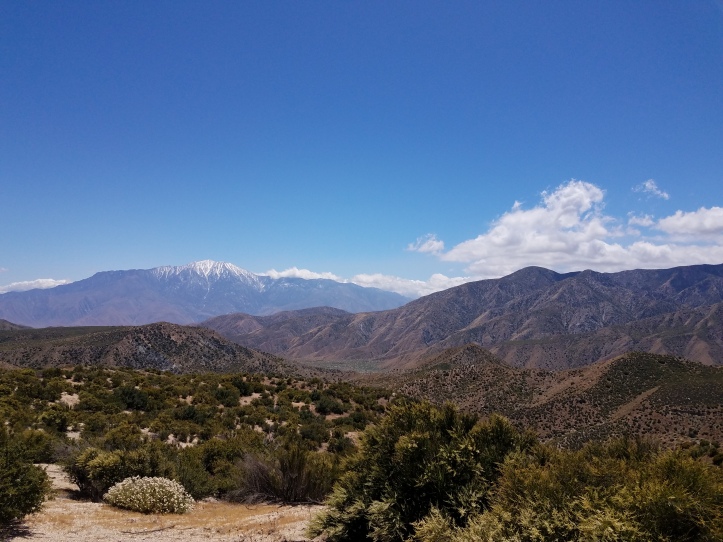 I got water, had a snack (an avocado I packed out from Idyllwild- so good!) and continued on my way. I didn’t get far before hitting another river crossing. Sebastian was close behind and navigated through it. Then there was another one. Then I fell behind and suddenly was on my own. The trail crisscrossed Mission Creek more times than I can count, each time having washed away any hint of the trail with this spring’s heavy flooding. Some were very wide with confused footprints going many directions, and all were full of tricky rocks, slippery sand and the water crossing itself. 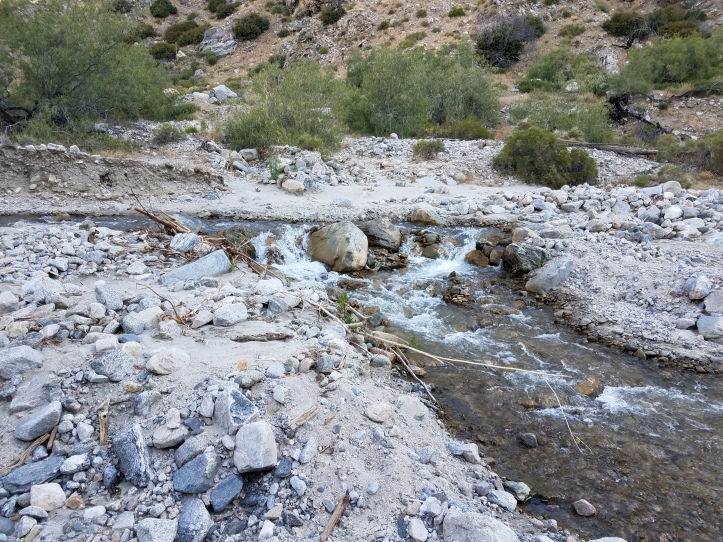 The sun began going down and I still wasn’t to camp. Just 2 more crossings. I spent almost an hour trying to find the trail on the other side of the first crossing. Crying, cursing the trail and river, angry and wondering what to do next, I finally found the familiar dirt path that has carried me over 225 miles. That stupid dirt path that keeps throwing me curve balls but will hopefully carry me to Canada. 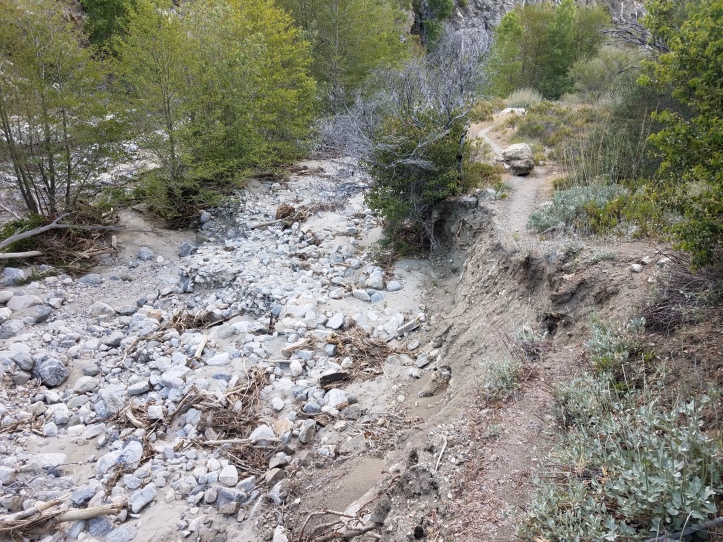 There was just one more crossing before I would rest for the night. As I approached it, I noticed day hikers on the other side, just about to enter the creekbed. Hallelujah, I knew where I was heading! I quickly scrambled across, laid my wet shoes and socks in the waning sun and got to work making camp. Just as I finished, I saw a group of hikers in the riverbed, struggling as I had been to find the trail. “The trail’s up here!” I hollered, and as they turned, I realized it was Professor, BigMoney, Hot Takes and KoolAid! We chatted a bit once they were back on the trail but they planned for a few more miles so continued on. 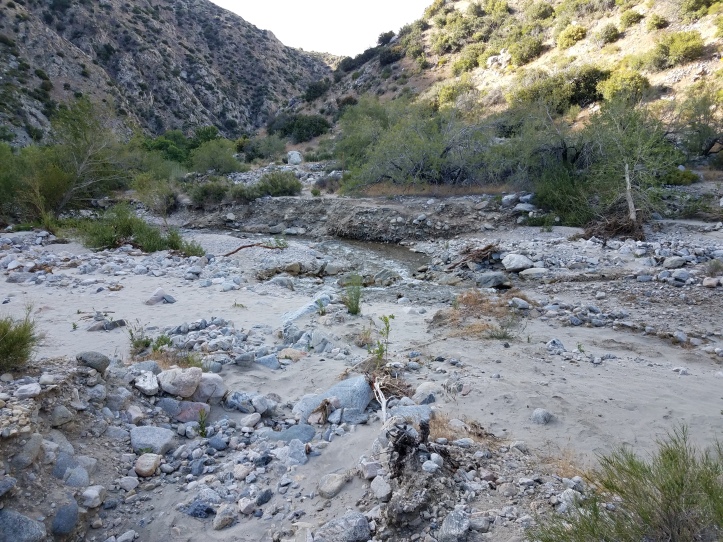 It got cold quickly once the sun went down, so I curled up in my tent, enjoying the solitude and the constant ability to set my own schedule. There are more crossings of Mission Creek tomorrow- I can only hope that they are more straightforward or that my brain can process them better in the morning.

Hiked with: no one

Camped with: no one